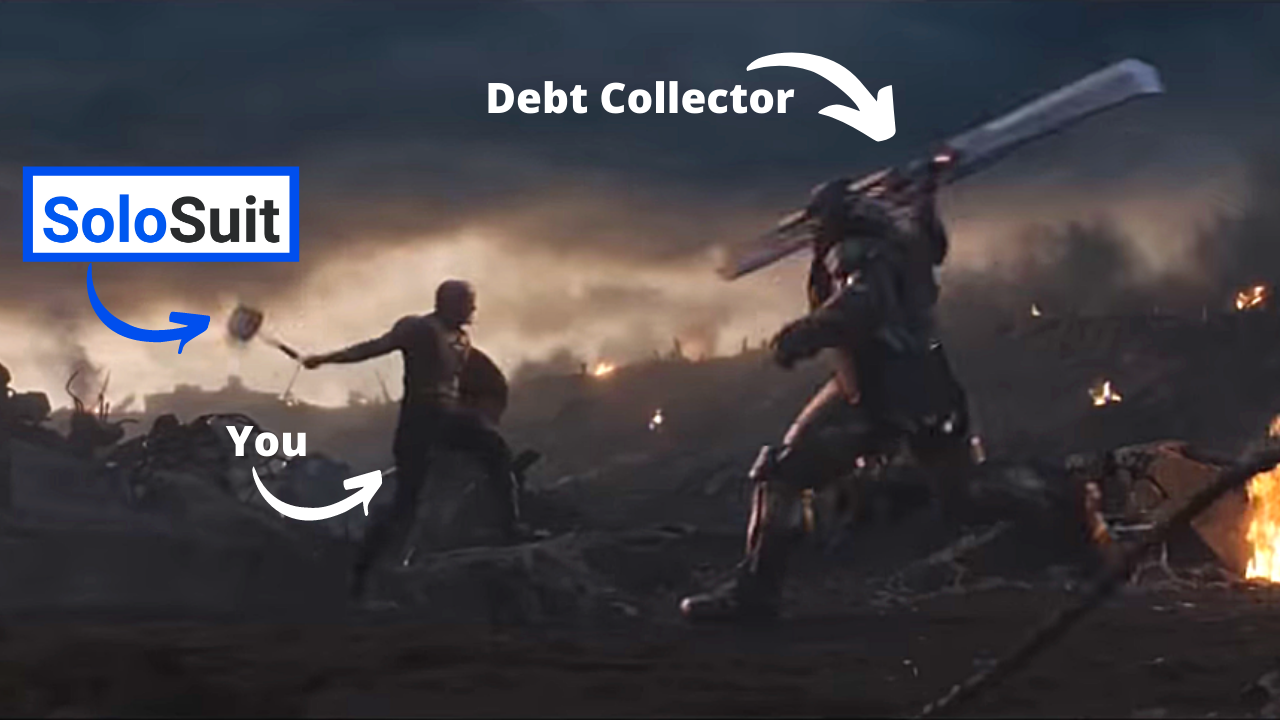 If you are the Captain America, and Associated Credit Services is Thanos, then SoloSuit is Thor's Hammer.

Summary: Sued for a debt by Associated Credit Services? This guide is for you. Use SoloSuit to respond in 15 minutes.

Receiving a notice of a lawsuit from Associated Credit Services (ACS) is a serious matter. This Westborough, Massachusetts company has been collecting past due debts since 1969, and its activities span the entire United States. ACS has a tried-and-true formula for collecting debts. Usually, it starts with letters and phone calls. They will try to get you to pay the full debt and added fees and interest.

If you receive communications from ACS, take them as an opportunity to resolve the debt without being sued. ACS agents know that it is cheaper to take a lower amount in settlement than to litigate the matter in court. Debtors can use this to their advantage to convince ACS to waive fees, penalties and some of the debt itself. If you don't have enough cash to pay in full, a payment arrangement can be made. Provided you make the payments, you will save money and avoid a lawsuit.

ACS employs teams of lawyers whose sole job is to litigate against debtors. When its attempts to collect fail, ACS refers your account to its legal team.

When you receive a complaint, attend to it immediately. Ignoring it will result in a default judgment for the full amount, plus fees and even the cost of litigation. Once a default judgment is handed down, you are powerless to stop collection activity and you must pay the debt even if you do not owe it or the amount is grossly overstated.

A default judgment leaves you with limited options. Debt collectors actually like it when defendants offer no defense. They can use legal mechanisms to seize funds.

Once ACS has a default judgment against you, it's “open season” on many of your assets. If you have less than the judgment in the bank, ACS can levy your bank account and, in some jurisdictions, strip it bare. Wage garnishment is another possible consequence. Some jurisdictions limit wage garnishments more than others, so find out what percentage can be garnished in your locality.

Imagine money disappearing from your bank account and paycheck, leaving you unable to pay the rent. To avoid this, you must respond.

One method is to work out a settlement agreement with ACS. The agreement should waive any excessive fees and reduce the balance, while also dismissing the lawsuit. If you can afford the debt and owe it, it might be a better investment of your time to settle out of court.

If no settlement is in the offing, be sure to understand how to respond and the deadline for doing so. The lawsuit summons will provide a date by which you must file an answer with the Clerk of the Court. Do not admit that you owe the money. The burden of proof is on ACS to demonstrate that you do.

Don't assume ACS has the right to collect on the debt. ACS is a collections company, which means it purchases debt secondhand. It's possible ACS never legally acquired the debt. In answering the complaint, request that the judge order the plaintiff to provide proof of its right to sue. The plaintiff must provide the following:

If ACS cannot provide these, request a dismissal.

With SoloSuit you can make the right affirmative defenses the right way.

Some of the most effective include the following:

You Are Not Responsible for the Debt

For example, you've been billed for credit card charges you never made.

The Amount Demanded Is Inaccurate

Debt collection lawyers often sue for the highest possible amount. Therefore, it's probable that errors in the favor of ACS have been made. Demand full documentation of all activity on the account.

The Statute of Limitations has Run

Statutes of limitations differ by jurisdiction, so be sure to find out what they are in your locality. If the statutes have run, the judge will dismiss the case. The statute of limitations clock usually begins ticking on the last day you were active on the account. Active is defined as the last time you made a payment or withdrew money from the account.

Is bankruptcy an option?

Most consumer debt can be discharged in a bankruptcy. Non-dischargeable debts include child support, taxes and student loans. If you only owe a small amount if money, bankruptcy may not be worthwhile. The legal costs and damage to your credit may cost more than you owe.

On the other hand, if you owe a large amount of dischargeable debt and have limited income and assets, you may want to consider bankruptcy. If ACS has fled a lawsuit against you for a dischargeable debt, a bankruptcy filing will force the court to dismiss the case, allowing you to walk away from the debt.

A lawsuit can be scary. It can lead to the seizure of assets or wage garnishment. If you receive a lawsuit from ACS, the most important thing is to respond to the suit. If the creditor wins a default judgment, you could be left defenseless and forced to pay more money than you really owe.

In responding to the suit, be certain to require the plaintiff prove you owe the money and assert any applicable affirmative defenses. If the debt is large, you may want to seek legal advice. By answering the suit promptly and actively asserting your rights, you can negotiate a better settlement or convince the court to dispose of the case.

Tips on how to effectively answer a summons for debt collection.

Key strategies for how to get back on track after a debt lawsuit.

Here's a list of guides on How to Answer a Summons for Debt Collection in each of the 50 states.